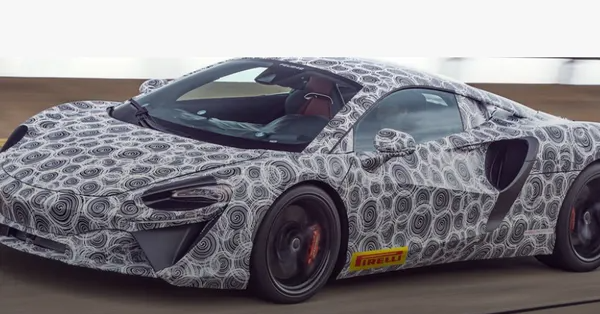 This new car will be the McLaren Artura and it represents the first ground-up design for the brand in more than a decade.

A New McLaren is coming and it will be an entry-level supercar that could fulfill your dreams. We expect this car to offer a carbon-fiber tub, powerful engine, and electrical gear which will all be new.

The new powertrain for the McLaren Artura will use a new twin-turbocharged V6 engine mated with a single electric motor. This new powertrain will offer top-end power that’s similar to the McLaren V8 models by using the electric motor to add more low-end torque. There will also be enough battery capacity to provide a medium range of electric-only driving, making this an efficient and impressive entry-level supercar, if there is such a thing.

The Body of the McLaren Artura

Under the body of the new Artura will be the new MCLA which stands for McLaren Carbon Lightweight Architecture. This will be a monocoque structure and a carbon-fiber tub that replaced the MonoCell which debuted in the 12C and has been revised to fit the rest of the lineup from this brand. The carbon construction will set the Artura apart from the rivals that continue to rely on aluminum construction in their vehicles.

From the start, the new McLaren Artura’s powertrain will be built at the Sheffield plant in the UK and then shipped to the vehicle assembly plant in Woking which is nearly 173 miles south. This is a true British supercar that will give you the performance and fun that makes it a car you want to drive when you find the track that’s right for you.

The Artura Starts a Revolution

More supercar automakers are working toward hybrid powertrains and electrification than ever before. McLaren isn’t any different at all. This brand has stated that every model in its lineup will be electrified by 2025. They aren’t stopping with the Artura and already have a 720S-based hybrid in testing as a development mule that will likely use a detuned version of the V8 hybrid powertrain that’s found in the Speedtail.

Expect Power to Continue from McLaren

McLaren has been a racing company for many years and has continued building cars that are fantastic on the track to give us the performance and fun we love to enjoy. Even with hybrid powertrains being offered, you can expect incredible power and speed with cars from this brand. The Speedtail model has 1,035 horsepower, which is an excellent number when on the track.

The rollout of the new McLaren Artura appears to be on schedule. This brand may slow down with other models, but we will see this new V6 hybrid powertrain in a supercar from McLaren at the time expected. This new dream car will be one that we can remember for a long time once it arrives.