After a one-year hiatus, the Jeep Wrangler models we love to see taking on the tough terrain of Moab were back this year.

The annual tradition can survive this one bump in the road and Jeep brought four impressive Wrangler models to enjoy. Some of these were meant for last year’s event but weren’t able to be used due to the pandemic, and one is the new Magneto model which is certainly interesting. 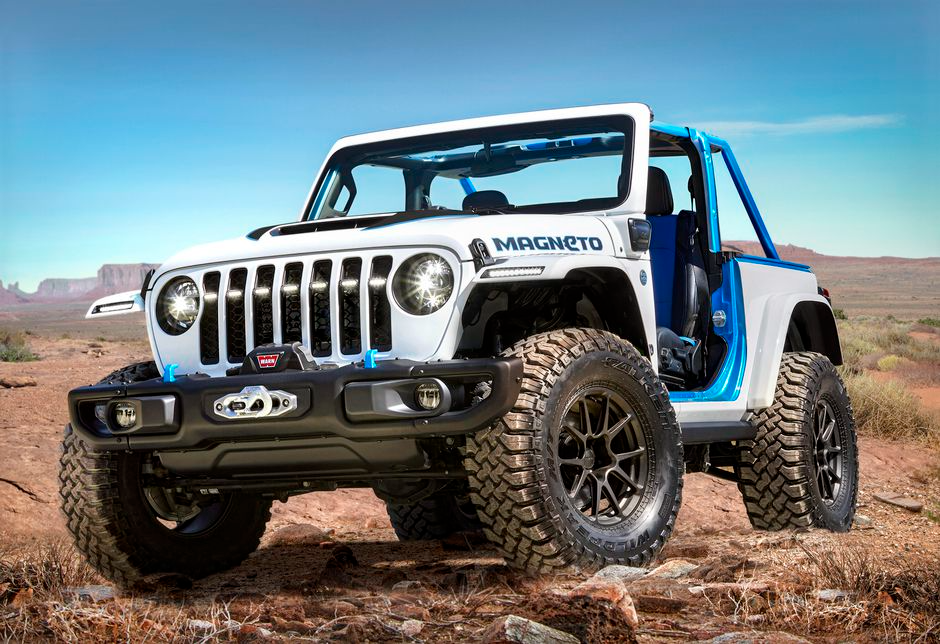 Similar to nearly every other model in the market, Jeep is working toward electrifying its lineup. This new Wrangler is an electric version, which might make some off-roaders and purists cringe. The Magneto makes use of battery power to offer the power needed to give the drive desired. This SUV has the same power as a V6 model with 285 horsepower and 273 lb.-ft. of torque. Amazingly, this electrified Wrangler does use a six-speed manual transmission to give you the fun of rowing the gears. If you’ve been waiting to see a retro version of the Jeep Wrangler, this Jeepster Beach Concept is what you’ve been waiting for. This is a resto-mod 1968 Jeep Commando which gives it a serious cool factor. The Jeep team did add the 2.0-liter turbocharged four-cylinder engine to the mix to give you the power of a Wrangler in a classic Jeep. The power comes in at 340 horsepower and 369 lb.-ft. of torque and the engine is mated to an eight-speed automatic transmission. Hard Core rock climbing duties were handled at Moab but his version of the Jeep Gladiator. This model is a Gladiator Rubicon that has the EcoDiesel V6 engine, an eight-speed automatic transmission, a pair of Dana 44 axles, and 37-inch BFGoodrich mud-terrain tires. When put together, the Red Bare has a 91:1 crawl ratio and an interior that offers custom red flannel inserts. This particular version of the Jeep Wrangler is made for open-air fun which means you’ll see this model without doors or a roof. Half doors from Jeep Performance Parts are used to give the protection needed when handling the wilderness. This impressive Jeep uses the classic Pentastar V6 engine to give you the desired drive in the wilderness.

The Jeep versions that missed the Moab Easter Weekend last year are the Farout, a diesel-powered Gladiator overlander, Top Dog, which has a great rig for serious mountain bikers, and the Jeep Wrangler Rubicon 392, which is the V8-powered version of the Jeep that we love to drive.

These amazing Jeep models made it across the Moab terrain and gave the company the traditional fun that has become part of what we expect from Jeep. With so many Wrangler models on the trails, this was certainly a fun and adventurous excursion across some of the roughest terrain that Jeep can find.